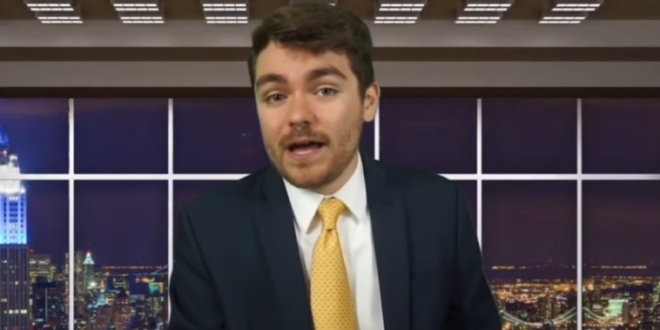 Neo-Nazi Leader: “Having Sex With Women Is Gay”

“And having sex with men is gay. Really it’s all gay. The only really straight heterosexual position is to be an asexual incel. That’s it. That’s all there is.

“Having sex in itself is gay, I think. I think that it’s really a gay act. Think about it this way: What’s gayer than being like ‘I need cuddles. I need kisses.’

“It’s all very sus to me. ‘I need to spend time with a woman’. I think, really, I’m like the straightest guy.” – Nick Fuentes, neo-Nazi leader and Holocaust denier

So white nationalist Nick Fuentes says he’s never had a girlfriend bc ‘dating women is gay,’ & ‘the only really straight, heterosexual position is to be an asexual incel.’ Aside from the hilarity of this, let’s be clear: his celibacy is not involuntary. He chose his loserdom

renowned incel nick fuentes says “having sex with women is gay” so i guess i’m coming out, bros pic.twitter.com/bf2skBjCqs

Sounds like a cult, right? The movement’s former treasurer is calling it that now. Leader Fuentes, who describes himself as an incel, beseeches his young, male fanbase not to have sex. https://t.co/dXdSdaza81