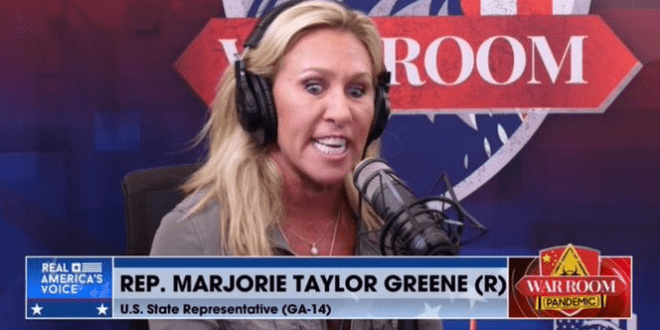 First there was “gazpacho” police. On the far-right Georgia congresswoman’s most recent broadcast of “MTG Live,” Greene claimed that the government wants “surveillance on every part of your life,” including on when people are eating a cheeseburger.

“Which is very bad because Bill Gates wants you to eat this fake meat that grows in a peach tree dish so you’ll probably get a little zap inside your body that’ll say ‘No, don’t eat a real cheeseburger, you need to eat the fake burger,’” Greene said with conviction.

For those keeping score at home:

Adding: If the hamburger descended from the cow, why do we still have cows?

The government when you refuse to eat a fake cheeseburger grown in a “peach tree dish.” pic.twitter.com/klixnVbggl

Damn! I’m wearing this meme out! Can someone add “Marshall Law” and “Peach Tree” dish? 🤣🤣🤣🤣 pic.twitter.com/ohh9b8aTte