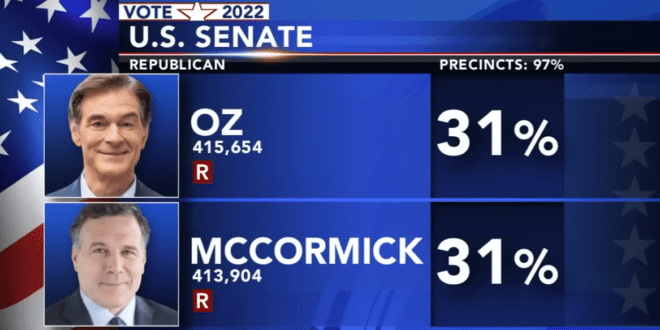 Republican Senate candidate Dave McCormick filed a lawsuit Monday in a bid to ensure certain mail-in ballots aren’t disqualified from last week’s Pennsylvania primary, in which his fight against Mehmet Oz remains too close to call.

McCormick, in papers filed in the Commonwealth Court of Pennsylvania, said a number of county boards of election are refusing to count ballots that arrived in time for the primary but were missing handwritten dates on the envelopes.

“These ballots were indisputably submitted on time—they were date-stamped upon receipt—and no fraud or irregularity has been alleged,” the suit says, adding that boards are refusing to count them because of the technicality.

Former Bridgewater CEO David McCormick sued to count some absentee and mail-in ballots that were rejected in his too-close-to-call Republican US Senate primary with celebrity physician Mehmet Oz https://t.co/Yeo9A4K66S