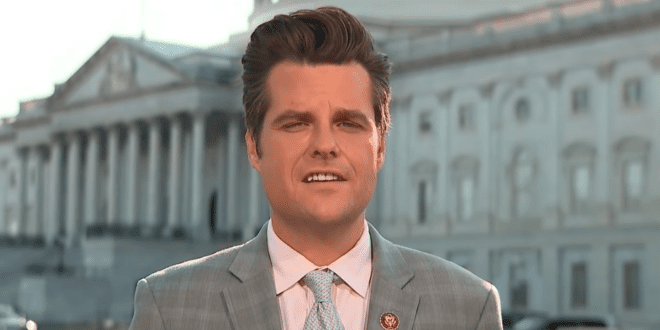 Embattled Rep. Matt Gaetz (R-FL) made an attempt to answer why anyone not serving in the military would have a need for an AR-15 capable of quickly spewing 300 bullets, as President Joe Biden noted in a speech over the weekend and received a speedy response from a mass shooting survivor. Taking to Twitter on Sunday, Gaetz responded to U.S. Army veteran and prominent Donald Trump critic David Weissman who posed the question, “Matt, why do civilians need Ar-15? Honest question.”

It’s kids who are being hunted. If you want an AR-15 fine but you should need a l license, thorough training, detailed documentation of ammunition and where the weapon is and stored, a in-depth background check. Come on- these are kids. Let’s find some common ground

By target sport to you mean children in schools? By self defense do you mean the cops with guns who waited while children screamed for their lives? Hog hunting with an AR 15? Is that even hunting? https://t.co/p5L1XH9Bgq

He said need, Matt. You don’t need an AR-15 to do any of those things. Weapons of war don’t belong on our streets. https://t.co/F29OPZh0fk

No, no, and fine, let’s license the shit out of that. https://t.co/pDBmmYegjV