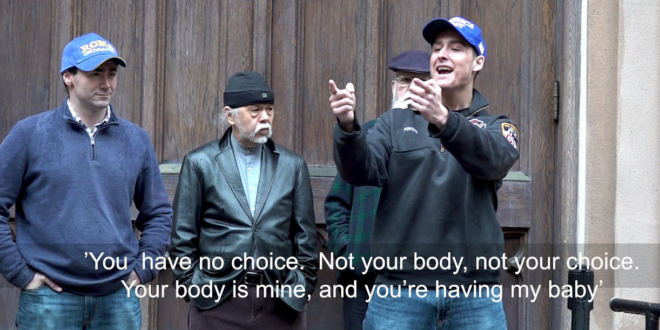 Man In FDNY Shirt Heckles Roe Protesters: “You Have No Choice, Your Body Is Mine, You’re Having My Baby”

A viral video showing a man telling abortion rights protesters that “your body is mine” and “you’re having my baby” has sparked outrage on social media. The Supreme Court leak prompted many more protesters than usual to gather outside the Old St. Patrick’s Cathedral in New York City on Saturday.

Closed captions on the clip described the man as “FDNY” (New York Fire Department), but it is not clear if the man is actually affiliated with the city’s fire department. He appeared to be wearing a fleece bearing FDNY insignia in the clip. The FDNY has been contacted for comment.

If there was any doubt about the ideology driving anti-abortion perspectives, this @FDNY firefighter just put it right out there. “Not your choice, not your body, your body is mine”. The absolute glee he takes in saying it should disturb literally every woman everywhere. https://t.co/kzVO39om2J

If this guy really is @FDNY, he’s gotta go. Imagine the terror a rape survivor might feel if this guy, who says he owns women’s bodies and forces them bear his children, comes into her home. He made his choice. He chose threats over his job. He’s literally unsafe. https://t.co/Ubj7MGLkDg

Who the hell is AMY SISKIND? A “self-hating” White Person? In AMERICA, a guy is allowed to Stand on a STOOP and say whatever he wants. He’s a FIREMAN. He’s not setting the law. If he’s getting some of it wrong, that’s ok. HE’S VOLUNTEERING TO KEEP YOU NUTS FROM RUINING CHURCH! https://t.co/cz0Pge9zek

The Newsmax dude defending the FDNY guy is not done apparently. https://t.co/gMLiCiXOJy

Silly “Allison” trying to get an off-duty FIREFIGHTER in trouble for exercising his Right of Free Speech. THIS IS STILL AMERICA. The dude can say whatever he wants. AND STAY THE HELL OUT OF THE CHURCHES WITH YOUR STUPID OUTFIT FROM HANDMAID’S TALE. HULU SUX! (Pain to sign up for) https://t.co/4gagMIj8Mr

Anti abortion extremists met with pro choice clinic defenders. This guy is an America First Groyper and member of FDNY! “the court decided you lose. You have no choice. Not your body not your choice. Your body is mine and you’re having my baby!” #RoeVWadeprotest HIT THE STREETS pic.twitter.com/jH8wkJiwMz