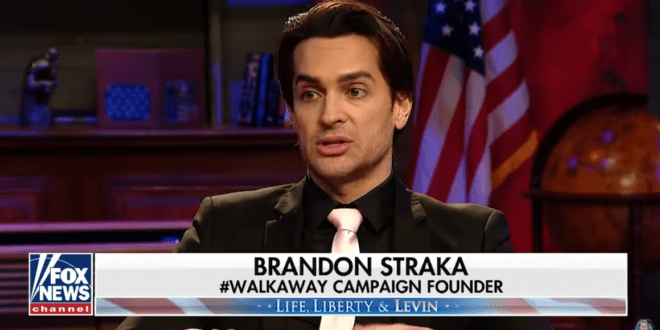 Homocon Rioter: I Pleaded Guilty But I Didn’t Do It

From the far-right Epoch Times:

Brandon Straka, founder of the WalkAway Campaign, pled guilty to a misdemeanor charge for disorderly conduct and admitted to telling protestors to take a shield from police officers during the Jan. 6, 2021, protests at the U.S. Capitol building in Washington.

Yet according to Straka, he was forced under pressure to confess to a crime he didn’t commit, only to avoid facing charges with long prison terms that he felt would not be heard before a fair trial. He provides video evidence from Jan. 6 supporting his claims.

To see this alleged “video evidence” you must subscribe to Epoch TV. Yeah, no. In the excerpt below, Straka claims he faced “well over 20 years” in federal prison unless he falsely pleaded guilty. Straka was sentenced to 90 days of home confinement and three years of probation. He emails his supporters pleas for donations multiple times every week.

“It’s been argued time and again by many #Jan6 defendants that they don’t feel like they’re capable of getting a fair trial in #WashingtonDC.”@BrandonStraka says he was forced to confess to a crime he didn’t commit, & he has evidence to prove it.

Here’s Brandon Straka’s footage of the Jan. 6 mob stealing a shield from a Capitol police officer while he cheers them on. pic.twitter.com/f9d48kSDZx

Brandon Straka previously called his actions on Jan. 6 “one of the stupidest and tragic decisions of his life,” and told the judge today that he was “deeply sorry and ashamed.” https://t.co/W4UfFi32pO

Brandon Straka told the judge that his followers wouldn’t tolerate him advocating for violence against police, but in his admitted statement of offense he admitted saying “take it, take it,” as other rioters took a U.S. Capitol Police Officer’s shield. https://t.co/W4UfFi32pO

*Brandon Straka, a right-wing activist who was banned from American Airlines for refusing to wear a mask, has been charged in Capitol riot.
*Video shows him encouraging #maga supporters to fight with police. ” “Take it away from him…. Take the shield!”https://t.co/ZmkcCUXiRe pic.twitter.com/rBLIO3vVhJ

ARIZONA! #WalkAway is inviting you to get “KARI’D AWAY” June 11th in Scottsdale, AZ!

Join @KariLake, @BrandonStraka, and the #WalkAway Team for a magical night of inspirational conversation, Q&A, and food and drinks 🍹 🍷 🍱