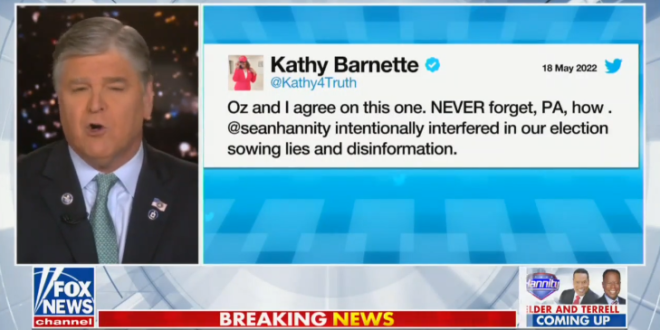 Third-place finisher Kathy Barnette is now attacking yours truly on Twitter. She’s putting out videos blaming me for her loss. Kathy, my first instinct was to put up all of your incendiary tweets again, and there’s a ton of them, but I really don’t need to defend myself.

You’re the one that really needs to answer the questions about all of your comments, and all of your tweets that are there. You can lash out at me all you want. You’re not the first person. But everything that we revealed is true. Prior to the election, we attempted to reach out to you and your campaign for comment over and over and over again. You and your team refused to get back to us to give us answers.

Now, maybe you stand by your past comments, maybe you don’t. But you refused to answer our questions. In fact, you only responded to me publicly on Twitter, and then I tweeted you back and said I would invite you on for a debate the day before election day with all the other candidates. I’m on 675 stations nationwide. You never got back to me. That, unfortunately would be on you.

She will never get elected to statewide office, in my opinion, unless she is willing and able to answer questions about her past comments, conduct, rhetoric, and tweets. I like Kathy Barnette, but without addressing those issues, she is unelectable in Pennsylvania and a general election.

Barnette’s QAnon followers are attacking Hannity by labeling him a “globalist elite.” Whee.

Hannity says Barnette is attacking him on Twitter by putting out videos blaming him for the election. pic.twitter.com/u3UH3xPWXG