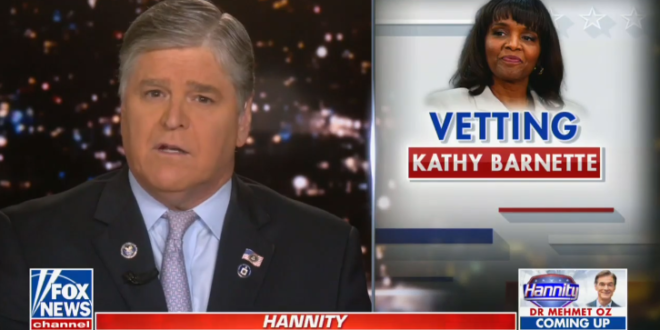 Hannity Attacks Barnette For Marching On US Capitol

Sean Hannity has suddenly decided that the “peaceful” march on the US Capitol was a bad thing because the woman challenging Trump’s pick for the US Senate took part alongside the Proud Boys. From his rant last night:

Kathy Barnette is now facing a massive and evolving scandal over her past beliefs, her past comments, her past tweets, and her actions and inconsistencies that she seems unwilling to answer. We tried to call her, contact the team, and we can’t make contact at this point.

Look at your screen. Here is Barnette marching alongside – this just broke today – radical Proud Boys during January 6. She claims she had no idea who they were and that she didn’t breach the Capitol.

And look at this on Twitter. Barnett frequently spewed – I mean, not just once, not one day, not occasionally – quite a bit of hateful rhetoric against gay people, people that are Muslims.

She even once asked her followers to pray for her because she was about to board a plane to California and there was a homosexual female on the flight.

She called for Islam to be banned in the United States. Kathy, we have something called freedom of religion this country. What part of that are you not understanding?

Hannity going after Barnette for her tweets again pic.twitter.com/aDMYIcpKVU