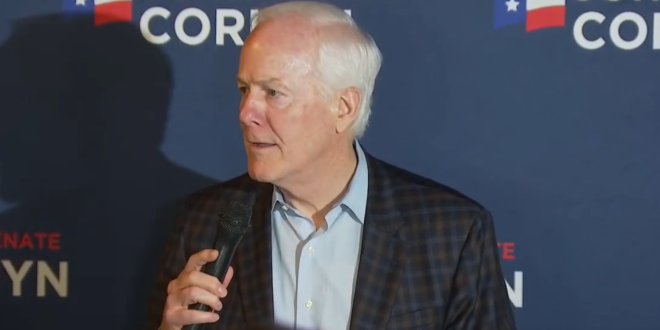 Attorney General Ken Paxton has faced a slew of controversies in the past few years, including an FBI investigation into allegations he abused his office to help a wealthy donor, a 7-year-old felony securities fraud indictment, a lawsuit from the state bar challenging his ethics as a practicing attorney for suing to block the 2020 election results, and accusations he cheated on his wife. Paxton has denied criminal wrongdoing.

“I will tell you that I remain very disturbed by the fact that the incumbent has had an indictment hanging over his head, for now, I don’t know, what has it been, six years? This is the chief law enforcement officer of the state of Texas. And it’s a source of embarrassment to me that that has been unresolved,” Sen. John Cornyn said on a Thursday call with reporters.  Cornyn has not endorsed in the primary.

Read the full article. Next week Paxton faces a runoff against Texas Land Commissioner George P. Bush as he failed to get over 50% of the votes in the March primary. Loony Louis Gohmert finished third in the race and will leave Congress in January.

Cornyn is the most prominent Texas Republican to criticize the attorney general’s rocky record ahead of the runoff election against George P. Bush. From our KHOU 11 News partners @TexasTribune.https://t.co/YWfJ9Q3jGI