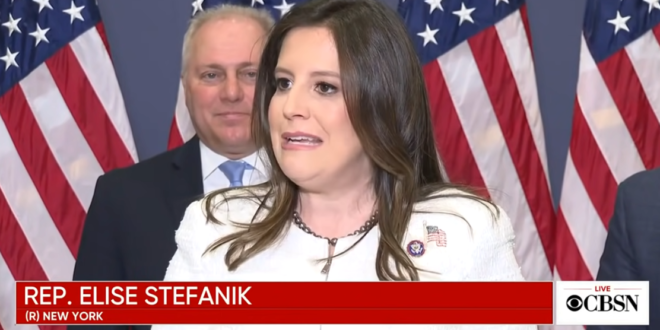 Rep. Elise Stefanik (R-N.Y.), who describes herself as “pro-life,” blamed the White House and mysterious “pedo grifters” on Friday for America’s infant formula shortage — and called for denying formula to migrant’s babies.

The “usual pedo grifters,” who were unidentified, appeared to be a reference to a particularly outlandish QAnon conspiracy theory that an international ring of child sex traffickers is being operated by Democratic leaders.

Stefanik blames the Biden administration for the current shortage of infant formula in America. The administration does not manufacture formula; it’s created and sold by three major companies, which have little competition.

My God, what happened to your soul? Please name the “usual pedo grifters.” Clearly you must have names, since you refer to the “usual” pedo grifters. Name them. Who are these pedophiles you’ve done nothing to stop? Or are you just feeding QAnon in an evil cynical enterprise? https://t.co/01H4B6HGdB

Dear @EliseStefanik: As a former prosecutor, I know that pedophilia is a serious crime that harms the most vulnerable. You trivialize pedophilia and victims of pedophilia by randomly and repeatedly calling people pedophiles. You should be ashamed and you should apologize. https://t.co/dwekX3hcu1

One thing we are not going to do is follow House Republican leadership’s suggestion that we let babies starve. This genuinely is disgusting.https://t.co/xDw6vVgnPh

I am sure you’re able to go ahead and identify these so-called “pedo grifters.” Don’t you have an obligation to protect the American people from such horrors?

We are all waiting…

I served in the Bush Admin with Elise. I try not to make politics personal. But giving a “wink / nod” to QAnon conspiracies by suggesting Democrats are pedophiles? That’s a new low. Rather than focus on “owning the libs,” she should aim to re-grow a conscience. I mean that. https://t.co/LLoRLf7IGB

This is disgraceful and so far beneath the dignity of the office you hold. You should delete this immediately.