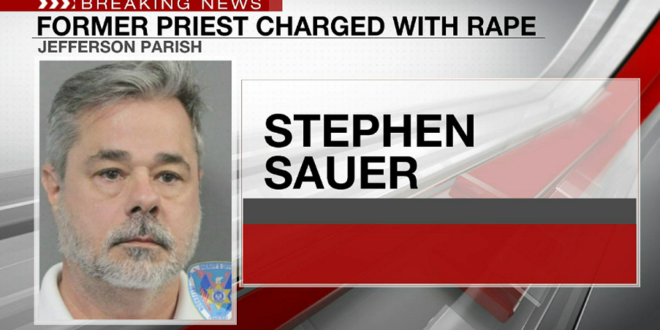 A former Jesuit priest and non-profit director has been arrested a second time for sex crimes allegations, jail records show. Stephen Sauer is accused of taking lewd photos and videos of unconscious men and sexually abusing at least one victim.

Sauer was removed from his position with the Arc of Greater New Orleans, an agency that works with mentally disabled people, in December of 2021 after being booked with five counts of video voyeurism and one count of sexual battery.

On Wed., May 18, Sauer was arrested in Jefferson Parish, this time accused of rape and an additional video voyeurism charge.

Read the full article. According to the linked report,  Sauer left the priesthood in 2020 “at his own request.” The second and third clips below are about the first arrest.

Stephen Sauer, the former Jesuit priest and non-profit director accused of taking hundreds of sexually explicit photos of unconscious men, has been arrested on new charges, including a first rape charge in the case. https://t.co/J26sgosvzj