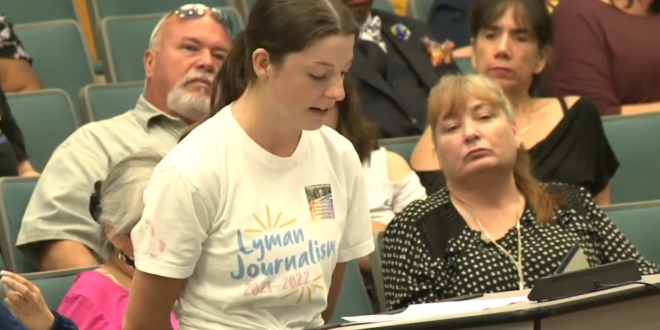 The yearbook controversy has come to an end. Lyman High School students will receive a complete yearbook — without covered photos and captions. The Seminole County Public Schools board voted unanimously Tuesday night to put disclaimer stickers in the yearbook instead of covering three photos from a student-led walkout with stickers.

Students were upset after school officials announced they would cover up the photos, which display a “Don’t Say Gay” student-led walkout in March criticizing the state’s law. Principal Michael Hunter said Monday that the yearbook would be delayed in order to achieve this, adding that it was required in order to fit in with school board policies.

“The enthusiasm from students that happen to be here today, this made me realize and think that looking at yearbooks and comments, who is to say that one comment is better than the other,” Abby Sanchez, the vice chair with Seminole County Public Schools said. “The book is prepared for the students by the students, and it’s meant to be a record of their time in high school, what they thought and cared about,” Sanchez said.

J.J. Holmes, a Seminole County student types his own speeches using his nose. Without a voice, he delivered a message that had some people in the audience in tears. “‘Don’t Say Gay’ isn’t even a law yet and you’re already using it to target students of the LGBTQ+ community,” Holmes said. “Tyler Clemente was 18-years-old when he jumped to his death from the George Washington Bridge. He was outed by another student for being gay,” Holmes said.

Danielle Pomeranz, the yearbook’s faculty adviser, told the board her students were only doing their job of documenting an important event that happened on campus. She said she thinks the yearbook can still be distributed to students by the end of the week.

The photos in question show students holding rainbow flags and a “love is love” sign. Accompanying captions include quotes from students sharing their views on the legislation and why they participated in the protest.

Superintendent Serita Beamon said the section didn’t make clear that the protest was student led, and covering the content was viewed as the best way to comply with board policy and get the yearbook to students in a timely fashion.

I’ve cued up the speech by the disabled student in the final clip below. Get a tissue.

Lyman High School Principal Michael Hunter said in a statement that “pictures and descriptions” documenting a student walk-out in March in response to Florida’s Parental Rights in Education law should have been “caught earlier in the review process.” https://t.co/pq3uRg8Vg6

This is unbelievable. Lyman High School wants to censor RAINBOW flags from their year book — what kind of message does that send for student equality AND freedom of speech? This isn’t a dictatorship despite DeSantis wanting us to think it is. #SAYGAY https://t.co/Vm49QT1Woq

Incredibly proud of the Greyhound yearbook staff and students from all over SCPS for speaking out against censorship and speaking up for themselves!

Also, unbelievably grateful to SCPS school board for their unanimous support tonight!

We stopped the stickers! 🎉 pic.twitter.com/DI1BKYT5eb