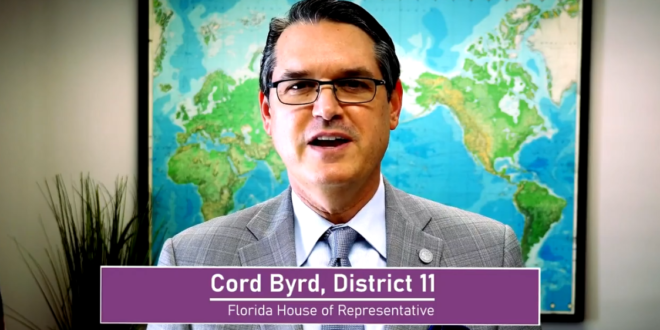 Florida Elections Now In The Hands Of QAnon Nutbag

Gov. Ron DeSantis replaced outgoing Secretary of State Laurel Lee on Friday with state Rep. Cord Byrd, who cursed at Black Democratic lawmakers during the session and whose wife has made comments supporting QAnon and the Jan. 6 U.S. Capitol riots.

DeSantis recently appointed Byrd’s wife, Esther Byrd, a former Marine who works in her husband’s law office, to the state Board of Education. She defended theories of QAnon, a far-right conspiracy cult that says the world is ruled by Satan-worshipping child molesters, after the couple was seen flying a QAnon flag on their boat.

They both quit Twitter for more than a year after she posted comments supporting the Capitol insurrection. “ANTIFA and BLM can burn and loot buildings and violently attack police and citizens. But when Trump supporters peacefully protest, suddenly ‘Law and Order’ is all they can talk about!” she tweeted.

We need a Secretary of State who’s top priority is free and fair elections, not a hyper-partisan GOP loyalist who takes orders from Ron DeSantis.

Our right to vote is sacred and I worry about what this could mean for our democracy.

Esther Byrd, defender of Jan. 6 rioters, named to @GovRonDeSantis‘ Board of Education

Ron DeSantis’ pick to oversee Florida elections—and their new election police force—has been known to fly a QAnon flag from his boat. His wife, who defended QAnon and Capitol rioters was appointed to the Florida Board of Education.https://t.co/8tkCaD0Vv8

I was in the House Chamber during the violent #January6th Insurrection. This appointment is a betrayal of our democracy. https://t.co/huT1ftGu6g

For those who need a reminder on who Cord Byrd is … and this is just the tip of the iceberg. #NoGood 🤦‍♂️ https://t.co/VjhqtfloxU pic.twitter.com/ZOVTDSl1hC