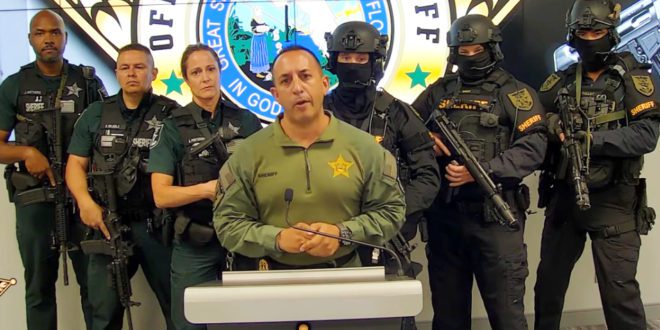 From the Lee County Sheriff’s Office:

On Saturday, May 28, 2022, the Lee County Sheriff’s Office learned of a threatening text message sent by a fifth grade student at Patriot Elementary School in Cape Coral. The School Threat Enforcement Team was immediately notified and began analytical research.

Due to the nature of the incident, the Youth Services Criminal Investigations Division assumed the case. Detectives interviewed the suspect, Daniel Issac Marquez (DOB 10/01/2011), and developed probable cause for his arrest.

Daniel Isaac Marquez was charged with Making a Written Threat to Conduct a Mass Shooting.

“This student’s behavior is sickening, especially after the recent tragedy in Uvalde, Texas,” Lee County Sheriff Carmine Marceno (R) said in a statement. Marceno, who brands himself as Florida’s “law and order” sheriff, said the boy who allegedly sent the threatening text message would face “real consequences.”

Marceno’s office also posted a video of a boy who appears to be the fifth grader walking out of the sheriff’s office in handcuffs. “Right now is not the time to act like a little delinquent,” said Marceno.

“It’s not funny. This child made a fake threat, and now he’s experiencing real consequences. Making sure our children are safe is paramount. We will have law and order in our schools! My team didn’t hesitate one second…NOT ONE SECOND, to investigate this threat.”

In the second video below from earlier this week, Marceno condemns federal aid to Ukraine that could have been spent on “hardening schools.”

Marceno was first elected as sheriff in 2020 after being appointed to then-Gov. Rick Scott in 2018 upon the retirement of his predecessor.

His “we are going to kill you” message below has gone viral on right wing sites. Expect this guy to run for Congress.

You don’t get to shoot our children. You bring deadly force in this county, we are going to kill you. pic.twitter.com/bYVnNT5FSl

The Lee County Sheriff’s Office works 24 hours a day, seven days a week to ensure the safety of our great residents. #lawandordersheriff pic.twitter.com/VIZWvJhmLb