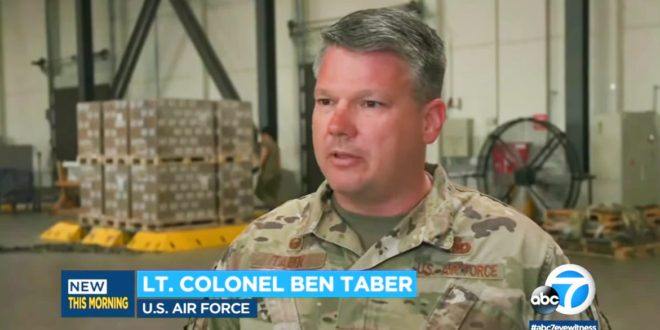 A military cargo plane carrying the first shipment of infant formula from Europe to address a critical shortage in the United States landed in Indianapolis on Sunday.

A Feb. 17 recall by top baby formula maker Abbott Laboratories and the closing of its manufacturing plant in Sturgis, Michigan have created one of the biggest infant formula shortages in recent history for U.S. families.

The CEO of Abbott, the company whose voluntary recall of several widely sold baby formula brands helped trigger a nationwide formula shortage, has apologized for the crisis, as the first overseas shipment of formula approved by President Biden arrived in the U.S. Sunday.

“We’re sorry to every family we’ve let down since our voluntary recall exacerbated our nation’s baby formula shortage,” wrote CEO Robert Ford in an op-ed published Saturday in the Washington Post.

The nationwide shortage has roots in supply chain disruptions and a market characterized by limited competition, exclusive contracts and few large suppliers.

The Biden administration official told CNN earlier that the product contained in the first shipment will be distributed to hospitals, doctors, home health care facilities and pharmacies in regions “where the needs are most acute.”

The official said that none of the first shipment would land on store shelves in the US, adding that the formula being shipped Sunday is hypoallergenic and will be fed to babies intolerant of protein in cow milk.

Folks, I’m excited to tell you that the first flight from Operation Fly Formula is loaded up with more than 70,000 pounds of infant formula and about to land in Indiana.

Our team is working around the clock to get safe formula to everyone who needs it. pic.twitter.com/cX4KU0eDtZ