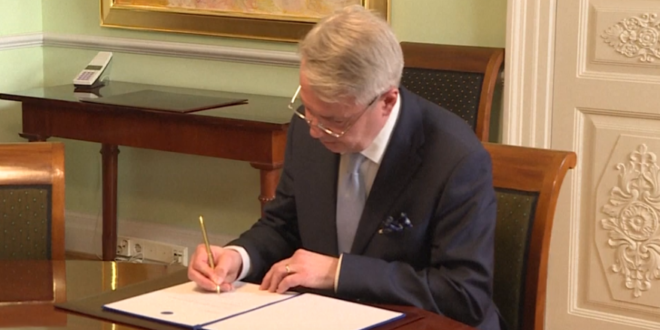 The ink was still drying on Sweden and Finland’s applications to join NATO on Tuesday when Finland’s President Sauli Niinistö arrived at the royal palace in Stockholm in a horse-drawn carriage. Niinistö’s state visit is seen as a potential bookend over accession by the two Nordic states into the Western defense alliance.

Earlier Tuesday, in front of TV cameras, Sweden’s Foreign Minister Ann Linde had signed her country’s official application, which she said would soon go to NATO Secretary-General Jens Stoltenberg alongside a similar paper from Finland. The putting of pen to paper ends the part of the process which was in Sweden and Finland’s own hands.

The putting of pen to paper ends the part of the process which was in Sweden and Finland’s own hands.

The 30 existing members of the alliance will now get their say on the eventual accessions. The process is expected to last well into the fall. https://t.co/UujPV6irVj

Finland’s Parliament has approved the country’s bid to join NATO, with the government now expected to sign a formal application and submit it to the alliance’s headquarters in Brussels in the coming days. https://t.co/UiiNmYZuEq