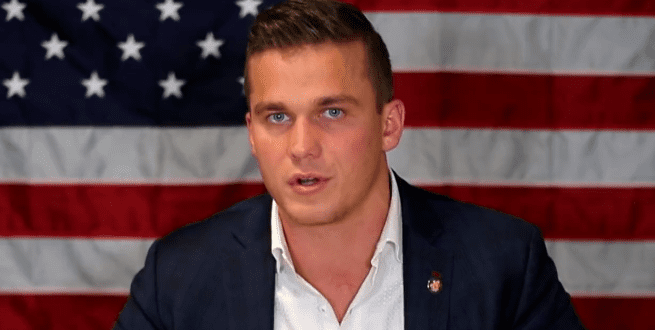 Federal Appeals Court: Insurrectionists Can Be Barred From Public Office Under The Fourteenth Amendment

Candidates who take part in an insurrection may be barred from holding public office under the 14th Amendment of the US Constitution, a federal appeals court ruled, overturning a lower court judge’s decision.

The US 4th Circuit Court of Appeals issued the ruling Tuesday in a challenge to former North Carolina Representative Madison Cawthorn’s candidacy for the House of Representatives.

While the ruling is legally binding only in the states that make up the 4th Circuit — Maryland, Virginia, West Virginia, North Carolina, and South Carolina — it could influence the outcome of legal challenges to multiple Republican House candidates tagged by critics for participating in events surrounding the Jan. 6, 2021, attack on the Capitol.

The decision undermines a key argument that Cawthorn and others — like GOP Rep. Marjorie Taylor Greene of Georgia — have used to defend themselves against the January 6-releated challenges. The groups behind these challenges say they’ll target former President Donald Trump if he runs again in 2024, so Tuesday’s ruling could have far-reaching implications.

“This ruling cements the growing judicial consensus that the 1872 Amnesty Act does not shield the insurrectionists of January 6, 2021 — including Donald Trump — from the consequences of their actions under the Fourteenth Amendment, and provides no basis to block state proceedings seeking to exclude insurrectionists from the ballot,” Free Speech For People, the constitutional advocacy group that challenged Cawthorn and Greene, said in a statement.

Attorneys for Cawthorn argued that since the House of Representatives can grant any insurrectionist amnesty with a two-thirds vote, state officials can’t preemptively take someone off the ballot for activity that may yet be forgiven. Cawthorn’s attorney, James Bopp Jr., said he was “very surprised” that the 4th Circuit “issued an opinion” after the congressman’s primary loss. “The case is moot,” he said.

Praveen Fernandes, vice-president of the Constitutional Accountability Center, which filed an amicus brief, said: “Although Representative Cawthorn just lost his party’s nomination for his seat in Congress, today’s ruling remains an incredibly important one.

“It makes clear that the 1872 Amnesty Act poses no barrier to similar future … challenges of the qualification of candidates to appear on the ballot, thus ensuring that section three of the 14th amendment can continue to serve its purpose as an important mechanism for holding public officials accountable when they violate their oaths of office.”

A federal appeals court has made it easier to try to disqualify political candidates for being “insurrectionists,” reversing a lower court ruling and ruling against Madison Cawthorn in a case challenging his candidacy based on his alleged support for the Jan. 6 attack.

Previous The Federalist: If Teachers Can’t Have Guns, The Only Answer Is For Parents To Homeschool Their Children
Next Josh Duggar Sentenced To 12.5 Years In Federal Prison