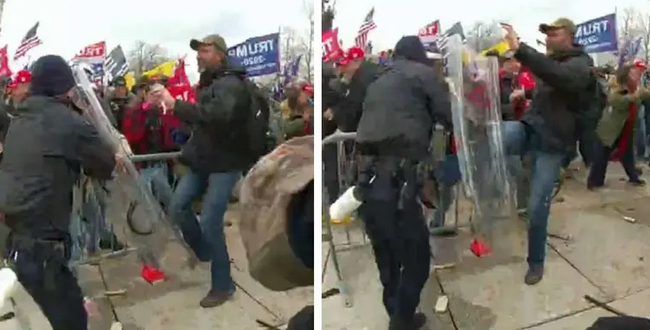 Ex-Marine Gets 27 Months In Assault On Capitol Police

Kevin Creek, a 47-year-old former Marine, was sentenced to 27 months in prison by Judge Dabney L. Friedrich for assaulting officers on Jan. 6. Creek was arrested in June and pleaded guilty in December, when he admitted to striking a D.C. police officer in the hand, pushing a Capitol Police officer and kicking that same officer. Prosecutors noted in a court filing last week that Creek brought a “first aid kit, mace, a boot knife, and binoculars” to D.C. on Jan. 6.

Video shows Creek reaching over a bike rack-turned-barricade and grabbing an officer’s face shield. He later struck that officer with his right hand before, according to prosecutors, “driving him backward forcefully several feet.”

Creek, a military veteran, then apparently “pointed aggressively to his Marine Corps cap, as if to emphasize, ‘I’m a Marine!’” in a move the government said reflected Creek’s intent to “weaponize his military training and experience against police officers.”

“When asked whether he regretted his conduct, Creek replied, ’50/50,’” the government’s sentencing memorandum said, adding that when the FBI interviewed Creek in June of 2021, he complained about being in trouble with the FBI and having to go through enhanced security screening at the airport.

[UPDATE] Kevin Creek (a former Marine) has been sentenced to 27 months in prison. #SeditionHasConsequences #SeditionTrack https://t.co/QhwFZnTtlT

Kevin Creek was known to #seditionhunters as #MadMongrel, and was 296-AFO on the FBI’s Capitol list. pic.twitter.com/rOWeoSTX1k