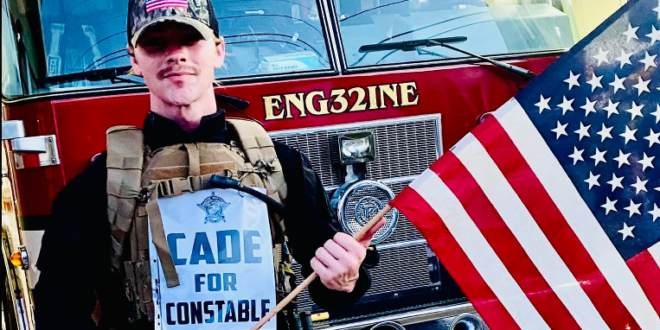 A Marine who was kicked out of the Marine Corps after sharing white supremacist materials is now running for local office in Kentucky. Thomas Cade Martin is a candidate for District 4 Constable in Bullitt County.

“Martin’s premature discharge and rank are indicative of the fact that the character of his service was incongruent with Marine Corps’ expectations and standards,” Yvonne Carlock, a Marine spokeswoman, said at the time.

In an April 28 Facebook post, Martin claimed that he was a “victim of cancel culture” and said he “was discharged under honorable conditions and retained my earned benefits.”

A Marine kicked out of the Corps after sharing white supremacist flyers is now running for local office https://t.co/i7gvxXyhaJ

Fascist ex-Marine Thomas Cade Martin, founder of defunct “U.S. Nationalist Initiative” kicked out of the @USMC in 2020 for racist posts, is running for Constable in Bullitt County, Kentucky and working with a white nationalist state senate candidate there: https://t.co/EJjcPT5YC4 pic.twitter.com/keDv0ItkUg

Subsequent reporting by @andrewpdyer revealed the USMC knew of Martin’s fascist org and racist posts since 2019. He was counseled but still sent on deployment. Significant action wasnt taken until the press caught on months later: https://t.co/wfq3RRQrEC & https://t.co/QFSoyi0KAZ

As for Martin, he’s unsurprisingly trading on his service, omitting or downplaying its disgraceful end while wooing conservatives with hilarious tacticool videos and illegally using the @USMC emblem and seal. https://t.co/EJjcPT5YC4 pic.twitter.com/zoQVA6glFd

Looks like Martin just deleted his campaign Facebook page outright, after he’d started removing @USMC iconography from it (as best he could). pic.twitter.com/rgxTd0DTQG

…the mask always slips. Martin presents as a mere “nationalist” founder of “US Nationalist Initiative.” But on IG/FB he describes getting “chills” from Hitler and daydreaming of a “future blue eyed blonde haired mistress” to “help contribute to the preservation of my lineage” pic.twitter.com/wPpU9Mf4EB