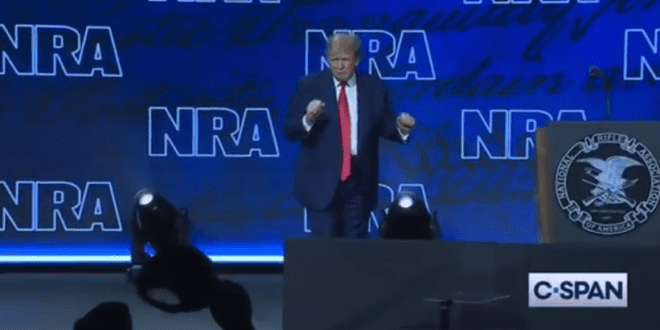 The family of Isaac Hayes has spoken out against former president Donald Trump walking off and dancing to one of the late soul music pioneer’s songs following his controversial speech at the annual NRA convention.

The ex-president’s speech at the gun-lobby event, mere days after 19 schoolchildren and two teachers were massacred in Uvalde, Texas, featured Trump reciting the names of the victims (to gong sounds) and calling for more armed teachers.

Immediately after his remarks ended, Trump broke out his signature wooden dance moves on-stage to tune of a 1966 soul classic written by Hayes.

The estate and family of Isaac Hayes DID NOT approve and would NEVER approve the use of “Hold on I’m coming’” by Sam and Dave by Donald Trump at this weekends @NRA convention.

Our condolences go out to the victims and families of #Uvalde and mass shooting victims everywhere.

Trump reads the names of the Uvalde shooting victims, with a bell ringing after each of them pic.twitter.com/nDH8OoMj5N

Children were gunned down and Trump and the NRA are dancing. https://t.co/UxemySPGTa

“When people show you who they are, believe them the first time.” -Maya Angelou https://t.co/cICi2VKdbG

Trump read the names of the 19 children that were slaughtered in their school, then did a little dance. This sick treasonous fuck was once President of the United States. In the names of those children, NEVER AGAIN!

At once a buffoon and a sociopath. https://t.co/pEiZUVeoFq

Previous Brooks: We Need Guns To “Take Back Our Government”
Next Kinzinger Now “Open” To Ban On Assault Weapons