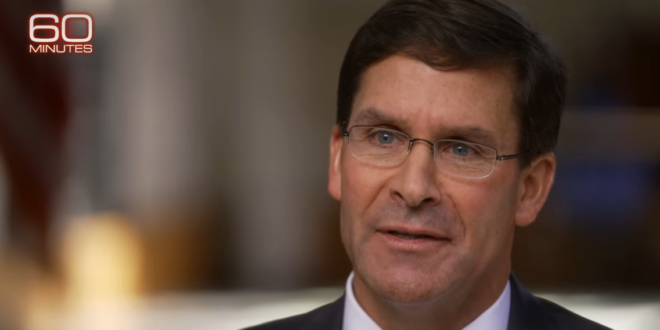 Esper: I Stopped US Strikes On Venezuela And Iran

According to a transcript of the interview provided by CBS, Esper told correspondent Norah O’Donnell, “it’s important to our country, it’s important to the republic, the American people, that they understand what was going on in this very consequential period — the last year of the Trump administration.”

“And to tell the story about things we prevented: really bad things, dangerous things that could have taken the country in a dark direction,” he added.

“At various times during…the last year of the administration, you know, folks in the White House are proposing to take military action against Venezuela, to strike Iran,” Esper replied. “At one point, somebody propose we blockade Cuba.”

Mark Esper Tells 60 Minutes He Would ‘Swat’ Down ‘Dangerous’ Ideas in Trump Admin, Including a Blockade of Cuba, Military Action Against Venezuela and Iran https://t.co/8IHzaBZEb2

In order to deal with what Mark Esper calls “crazy” ideas from the Trump White House, Esper says he came up with the “Four No’s & discussed it with CJCS General Mark Milley…the four things we had to prevent from happening between then and the election.” https://t.co/dJ4SjghCkX pic.twitter.com/Vc4ffzhlbT

Mark Esper says he prevented ‘dangerous things’ like military action against Venezuela and a blockade of Cuba while serving under Trump https://t.co/qKkq6cLXWd