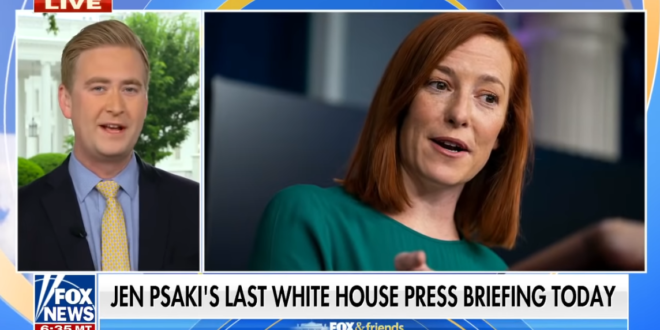 Doocy Praises Psaki: “She Made Me A Better Reporter”

Fox News White House correspondent Peter Doocy called press secretary Jen Psaki’s exit from the White House “the end of an era” on Friday, her last day at the press secretary’s lectern. Doocy credited her for making him a better reporter.

“It’s not just me asking questions. She would ask me questions right back. When I would go in there with something that was not part of the White House talking point for the day, she would ask me every single time ‘Who was saying that about us?’ or ‘Where are you getting that from?’” Doocy said.

“And so I always had to have it ready right away, and I think that all that extra homework that I knew I had to do because, when I challenged her she would challenge me right back, probably has made me a better reporter,” he continued. “And so, I am grateful to her for that.”