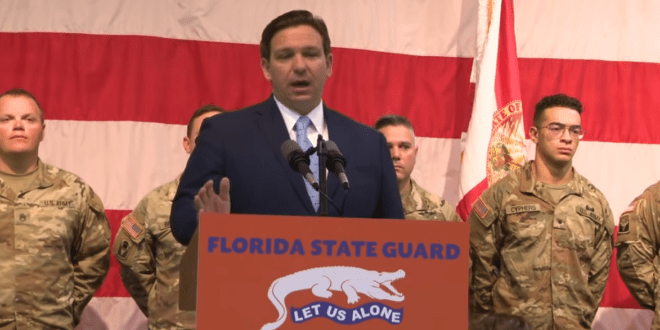 With a tagline saying, “protect Florida, defend freedom,” Gov. Ron DeSantis‘ office announced Tuesday that it opened an application portal for the Director of the State Guard, a civilian force that the Legislature resurrected this year at the Republican Governor’s behest. The Director will oversee the recruitment and training of 400 guard members and mobilize the force during states of emergency.

In addition to working as a team and meeting physical, tactical and scheduling requirements, the Governor’s Office asks that applicants be “ready to be a part of history.” The State Guard was founded as a World War II-era volunteer force but has been defunct since the 1940s. After DeSantis announced in December that he wanted a dedicated emergency force that doesn’t answer to the federal government, the Legislature reauthorized.

With the tagline “protect #Florida, defend freedom,” @GovRonDeSantis announces he’s taking applications for the director of the State Guard, a civilian force that the Legislature resurrected this year at his behest. What could go wrong? https://t.co/QW7c0cJvYm via @RenzoDowney

There are a number of things with which I would not trust Florida Governor Ron DeSantis. Right at the top of the list is the notion that he should have his own private army. https://t.co/eURfnbB18A