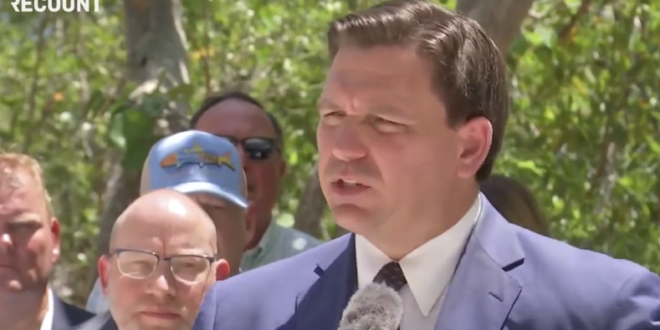 At a news conference in Fort Myers Beach Tuesday, Florida Gov. Ron DeSantis briefly addressed a leaked draft opinion that suggests the U.S. Supreme Court is poised to overturn the landmark 1973 Roe v. Wade case that legalized abortion nationwide. Asked if he will now consider a strong ban on abortions, he stopped short of saying he would, only saying that the 15-week abortion ban that was signed into law recently is “fully consistent with the federal constitution.”

DeSantis quickly pivoted to outrage at the leak, calling it an “attack” on the justices.”I think it was an intentional thing to whip up the public, make it political, and bully [the justices] into changing their opinion,” he said. “That’s not something that’s appropriate for the judicial branch That’s a real breach of trust,” DeSantis said. “That’s a judicial insurrection, to be taking that out and trying to kneecap a potential majority through extra-constitutional means.”

Without a shred of evidence who leaked the draft brief or why, Ron Desantis said the leaking of it was a “judicial insurrection.”pic.twitter.com/dabNWcQR5i