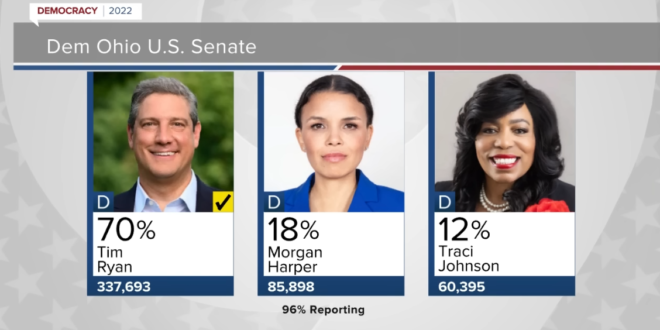 The 10-term congressman from Ohio’s blue-collar Mahoning Valley defeated progressive Morgan Harper, a former consumer protection attorney, and one other rival to claim the Democratic nomination for the seat being vacated by retiring Republican Rob Portman.

Ryan’s victory was widely expected, given his long history in office and his backing by U.S. Sen. Sherrod Brown, the state’s highest-ranking Democrat. Democrats see the November election as one of its best chances nationally to flip a seat.

On to November! Never bet against Ohio. pic.twitter.com/V7im0dyXau

Tim Ryan is now the Democratic nominee for US Senate in Ohio. Tim just released this new ad on scumbag and Trump kiss ass JD Vance. Give it a watch and retweet. pic.twitter.com/cgnbSOvubp

Tim Ryan would be very wise to add a consultant who understands the 22% of anti-Trump Ohio Republicans who voted for Matt Dolan.