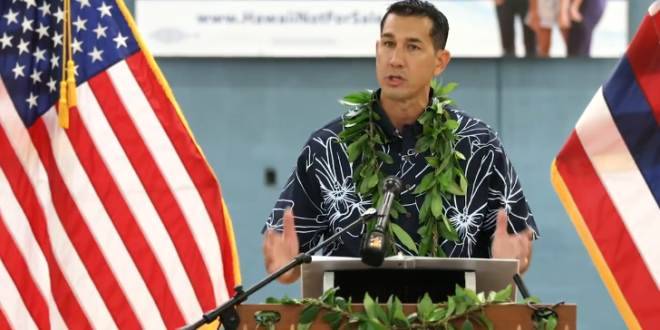 Rep. Kaiali’i Kahele (D-Hawaii) said Saturday he will run for governor of the state, making formal a campaign he had hinted at for months.

Kahele will begin the contest just three months before Hawaii Democrats pick a nominee to replace term-limited Gov. David Ige (D). He is likely to be among the front-runners, along with Lt. Gov. Josh Green (D) and former first lady Vicky Cayetano (D).

Kahele, 48, has served just one term in Congress, though he has rarely ventured to Washington in recent months. Kahele has voted in person on Capitol Hill just five times this year, all in January, Honolulu Civil Beat reported.

Read the full article. Kahele won by 33 points in 2020 after Tulsi Gabbard surrendered her seat to run for president.

Hawaiʻi has been controlled by special interests & big 🤑 for far too long. Today we put an end to that by taking donations of no more than $100. Please help us return Hawaiʻi to the people by donating to our grassroots campaign today! #HawaiiNotForSalehttps://t.co/AClWfuAEYY pic.twitter.com/urojha2CnB