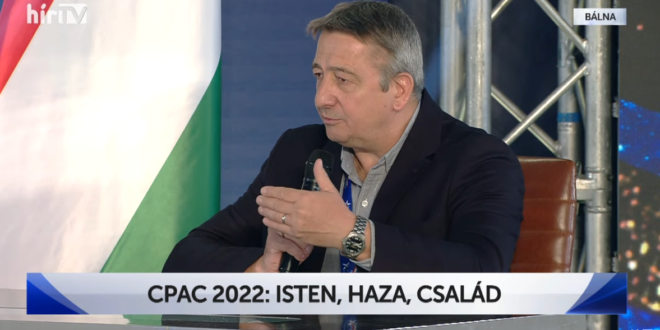 A notorious Hungarian racist who has called Jews “stinking excrement”, referred to Roma as “animals” and used racial epithets to describe Black people, was a featured speaker at a major gathering of US Republicans in Budapest.

Bayer, a television talkshow host in Hungary, has been widely denounced for his racism. During the 2020 Black Lives Matter protests, he wrote on his blog: “Is this the future? Kissing the dirty boots of fucking [racist epithet] and smiling at them? Being happy about this? Because otherwise they’ll kill you or beat you up?”

The final speaker last night was US extremist Jack “Pizzagate” Posobiec, who is perhaps most infamous for wading into an anti-Trump protest to wave a “Rape Melania” sign that was, of course, heralded on right wing sites as evidence of leftist hatred.

I’ve cued up the clip below in which Bayer attacks Calvin Klein for featuring a black model.

* Falsely claimed that Bernie Sanders had asked his supporters to “take down Trump” & that Loretta Lynch had called for “blood in the streets” (after Rep. Scalise was shot)