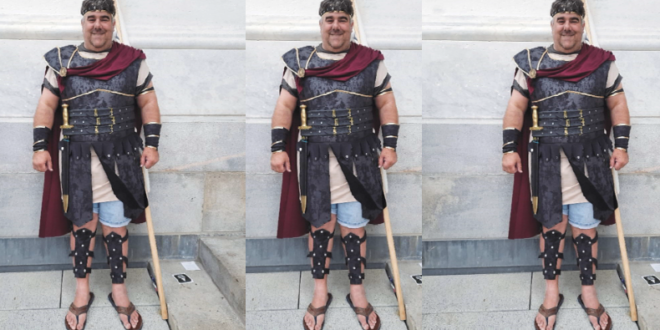 The Arizona man who donned an ensemble he claimed represented a figure from the Book of Mormon will spend 45 days in jail for joining the violent mob that stormed the U.S. Capitol.

James Wayne Entrekin, 49, wore what prosecutors described as a “Roman Gladiator Costume” as he made his way through parts of the Capitol building on Jan. 6, joining hundreds of Donald Trump supporters who pushed their way inside in an effort to stop Congress from certifying the results of the 2020 presidential election.

He told another rioter that he was dressed in the style of Captain Moroni, a figure from the Book of Mormon who is believed to have led a fight against a group of people who “wanted to overthrow democracy and install a king.”

Man Who Dressed as ‘Captain Moroni’ from Mormon Sacred Text on Jan. 6 Tells Judge He Still Believes Election Results Were ‘Tampered’ with, Gets Jail Timehttps://t.co/f6nFrfnjZ9

In documents filed with the court, investigators had surveillance video from inside the U.S. Capitol showing Entrekin inside the building. They also obtained a video from Entrekin’s phone inside the Senate Parliamentarian’s Office. @azfamily pic.twitter.com/UrqLhFeSu9

Prosecutors say this screenshot comes from Entrekin’s phone and shows someone with feet on the desk in the Senate Parliamentarian’s office…. which was trashed on Jan 6, 2021 pic.twitter.com/yfMeOAJ6EM

“My going about inside this consecrated edifice was unbecoming of the ancient character I had hoped to personally portray,” Nathan Entrekin tells the judge. https://t.co/r945cz8SYH pic.twitter.com/9ltOX9GzZI