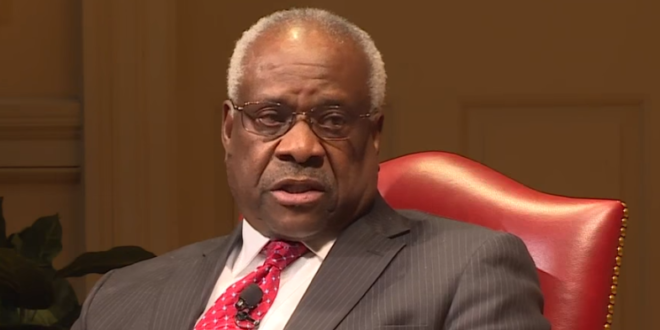 Justice Clarence Thomas, following the leak of a draft majority opinion overturning Roe v. Wade, said Friday that government institutions shouldn’t be “bullied” into delivering what some see as the preferred outcome.

“The events of earlier this week is one symptom of that,” Thomas said. He added that “you cannot have a free society” without stable institutions.

His comments came before an audience of mostly judges and lawyers at the 11th Circuit Judicial Conference in Atlanta. Chief Justice John Roberts had addressed the same conference Thursday, calling the leak “absolutely appalling.”

Thomas said Friday that the judiciary is threatened if people are unwilling to “live with outcomes we don’t agree with” and that recent events at the Supreme Court might be “one symptom of that.”

He referred a couple of times to the “unfortunate events” of the past week, and in a question-and-answer session led by a former clerk, he said he worried about declining respect for institutions and the rule of law.

“It bodes ill for a free society,” he said. It can’t be that institutions “give you only the outcome you want, or can be bullied” to do the same, he said.

I may be just a small-town political scientist but I reckon one reason respect for institutions might be on the decline is Supreme Court justices pretending their spouses aiding and abetting and insurrection is no big whoop and doesn’t require recusal. https://t.co/uckhIGKa3M

New: Justice Clarence Thomas says in Atlanta: “We can’t be an institution that can be bullied into giving you just the outcomes you want” — though his wife Ginni Thomas attempted to do just that as she sought to help overturn Biden’s 2020 election win.

Don’t get mad at Clarence Thomas for trolling us.

Get mad at Democrats in Congress for not even holding investigations into him and his wife, let alone censuring or trying to impeach him. 😡 https://t.co/WkUaJeip5Y