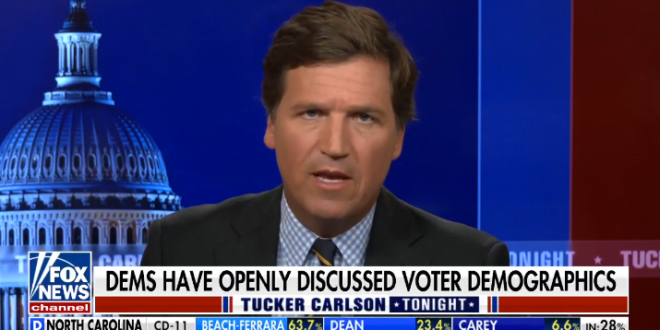 Carlson: The Left Is Behind Great Replacement Theory

You’ve heard a lot about the “great replacement” theory recently. It’s everywhere in the last two days and we’re still not sure exactly what it is.

Here’s what we do know for a fact. There is a strong political component to the Democratic Party’s immigration policy. We’re not guessing this, we know this.

And we know it because they have said so. They’ve said it again and again and again. They’ve written books on it and monographs and magazine articles, they have bragged about it endlessly, they talk about it on cable news constantly.

And they say, out loud, we are doing this because it helps us to win elections. That’s not something that’s said once, it’s something they’ve gloated about again and again and again. And we think that’s wrong. And in case you doubt us, here they are.

So you play clips of them saying it and you’re the deranged conspiracy nut. Maybe the funniest part is they may not be right.

The Democratic Party has decided that rather than convince you, people who are born here, that their policies are helping you in making the country better and stronger, they will change the electorate. Again, they say that. We are not guessing.