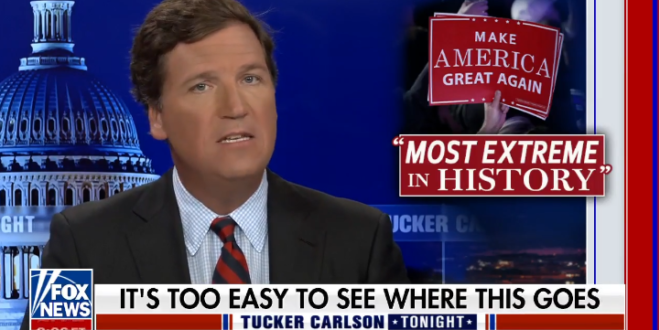 Fox News has the transcript:

So, what he said is a lie, but here’s the line that you should never forget and we’re quoting, “This MAGA crowd,” (which is to say the tens of millions people who voted for Donald Trump) is really, we’re quoting, “the most extreme political organization that has existed in history.”

In history, all human history, which is to say worse than Hitler, worse than Stalin, worse than Mao. It’s hard to believe he’s talking about tens of millions of American citizens, but he is.

It is shocking that any president would and he just did and it’s easy to see where it goes from here.

What do you do to terrorists? Well, you know what you do. You kill them. It doesn’t matter if they’re American citizens. Barack Obama told us that. You just drone them.

They’re terrorists. Terrorist must die. So, you should pay close attention to what any president says from the podium, particularly when it’s Joe Biden, and everything he says, he reads because he has no choice.

What are we seeing? We’re seeing a coordinated effort by the Joe Biden administration to recharacterize political dissent as terrorism. “Disagree with us, you’re al-Qaeda, you’re Hitler.”

Here’s what Biden actually said: “This MAGA crowd is really the most extreme political organization that exists in recent American history.” Emphasis mine.