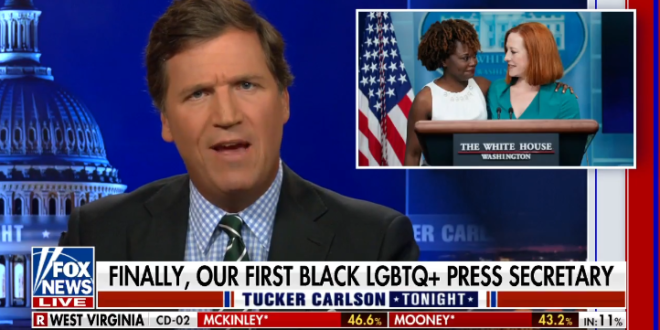 Karine Jean-Pierre is our first out LGBTQ+ White House Press Secretary and that’s all you need to know. It’s a good thing, shut up and celebrate. That’s why she got the job.

She’s in the right group and so the Biden administration, which thinks exclusively in terms of groups and never in terms of individuals because individuals are messy and inconvenient, the group is all that matters.

This is exactly how they pick Supreme Court justices or vice presidents or members of the Federal Reserve Board. And now, the all-important press secretary gig has gone to someone on the basis of group.

It’s really simple, show us your picture and we’ll tell you if you’re qualified for the job. And in many ways, Karine Jean-Pierre is perfect for the job.

Not only is she a member of the out LGBTQ+ community, she’s also, critically, the product of a private school and an Ivy League college and yet still oppressed somehow.

She is furious at America despite her ample privilege and enraged by its racist systems of oppression. And she’s happy to tell you about it.

Tucker Carlson attacks incoming WH Press Secretary Karine Jean Pierre on the basis of her race and sexual orientation: “That’s why she got the job. She is in the right group […] It’s really simple, show us your picture and we will tell you if you are qualified for the job.” pic.twitter.com/Y5G0tj9PPw

Previous Gallup: Only 31% Worried About COVID As Cases Rise
Next Tokyo To Begin Recognizing Same-Sex Partnerships