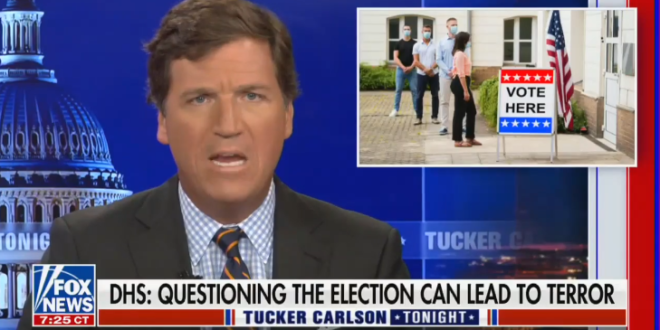 Carlson Lies That It’s Now A Crime To Question Election

“We and you and every other American has an absolute right to seek the truth about elections or any other topic and to say what you think about it, period. So we’re – it turns out – the only news outlet left in America that believes that.

“It is now effectively a crime to ask questions about what happened during the last presidential election. That is not an overstatement, by the way.

“The Department of Homeland Security, which by the way is of course a law enforcement agency – the biggest in the country – believes that asking questions about the last election is a crime.

“False claims about the last election are fueling violence? Now, violence is always bad. We’re always against violence no matter who commits it, unlike the left.

“But asking questions about the last election is constitutionally protected. It’s a right given to you by God and safeguarded by the U.S. government, period.

“But they’re telling you you’re committing a crime and you’re violent if you ask questions.” – Tucker Carlson, in yet another stupid lie, last night.