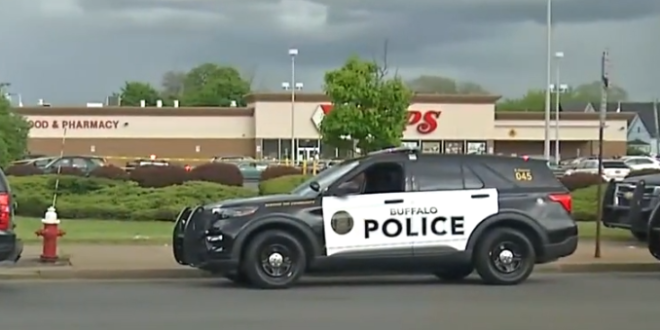 An eighth person injured in the gunfire was said to be in critical condition. Sources said the suspected gunman entered the store carrying a rifle and wore military-style gear or a type of body armor. Public in the immediate vicinity has been asked to avoid the store while police investigate.

The first tweet below and the followup story by BNO News have not yet been confirmed by other outlets. I’ll update this post as more information emerges.

One of the deceased was a recently retired Buffalo police officer who was working security at the store, both sources said.

The Buffalo News is withholding the retired officer’s identity because it could not be determined if his family had yet been notified. As many as five bodies were found in the parking lot, the onsite police official said.

Saturday’s attack was live-streamed on Twitch and screenshots from the recording showed horrific scenes, including a woman who is shot in the head as she walks outside the store. In other screenshots, victims can be seen on the floor of the supermarket.

A 106-page online manifesto, believed to have been uploaded by the shooter, explained that he was motivated by a conspiracy theory that white people are being replaced by other races. In the document, he says he is 18 years old and a self-described white supremacist and anti-semite.

Suspect in New York state mass shooting said in online manifesto that he was motivated by a conspiracy theory that white people are being replaced by other races https://t.co/PEZFzTpGlL

BREAKING: BPD on scene of a mass shooting at the Tops in the 1200 block of Jefferson Avenue. Police say multiple people have been struck by gunfire. The shooter is in custody. Motorists and residents are urged to avoid the area.

Video purportedly from the scene of the mass shooting at the Tops store in Buffalo, NY shows police taking a 20 (possibly 30)-something white man dressed in fatigues into custody. pic.twitter.com/r2u8IUsNkd

Just got a call from a source briefed by law enforcement in Buffalo.

They confirmed the shooter is a known white supremacist and drove into town from Broome county targeting this grocery store knowing it was in a predominately Black area of town.