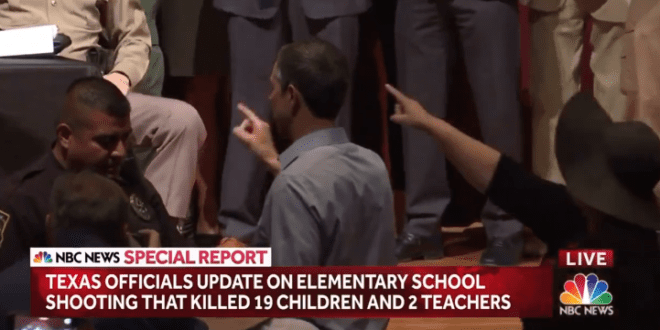 Beto O’Rourke Crashes Texas Gov’s Press Conference On Shooting: “You’re Doing Nothing, This Is On You”

Texas gubernatorial candidate Beto O’Rourke just crashed Gov. Greg Abbott’s press conference on the Ulvalde school massacre, where he and Lt. Gov. Dan Patrick was issuing the usual thoughts and prayers blather and even saying that the massacre could have been worse.

Moments after O’Rourke approached the dais, multiple Abbott flacks began shouting at him, with one calling him a “sick son of a bitch.” O’Rourke was eventually pulled away by the police. Watch every moment of the mayhem.

.@BetoORourke interrupts @GregAbbott_TX’s presser on Uvalde. He tells group, “The time to try to stop the next shooting is right now. And you’re doing nothing. You’re all doing nothing.” pic.twitter.com/JFlDoeIrJV

Beto O’Rourke confronts Abbott and Texas Republicans during press conference after Texas tragedy. “You’re a sick son of a bitch,” a man yells at O’Rourke. Lt. Gov. Dan Patrick later says there will be “plenty of time” to assess what needs to be done pic.twitter.com/GxVDVbkyMb