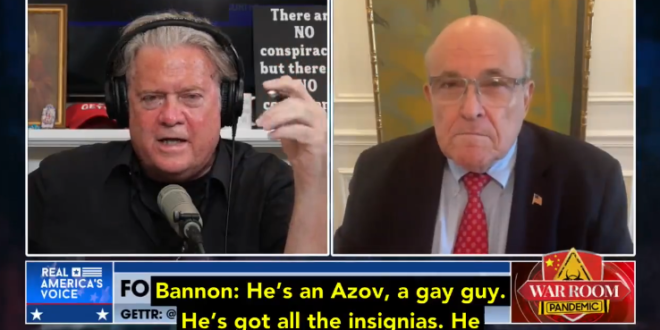 “He’s an Azov, he’s a gay guy, he’s got all these insignias. He comes across – he says he’s a left-wing authoritarian, an eco authoritarian. It’s in the manifesto, which they won’t release. I don’t know, just release it, it’s not gonna warp people’s mind. People can make decisions, parents got to be on top of stuff. Why are the parents that – is this kid going to church? Is he in church?” – Steve Bannon, inventing things that nobody else who have actually read the shooter’s manifesto have reported.

Speculating on motivations, Steve Bannon claimed the Buffalo shooter was “a gay guy” and asked where the shooter was attending church. pic.twitter.com/d6VK0PbFBu

Steve Bannon claims the media is “inappropriately” focused on Tucker Carlson in the wake of the Buffalo white supremacist shooting. pic.twitter.com/4dyROPBcYU