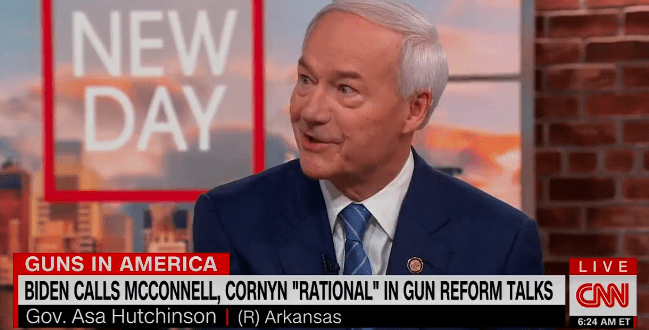 Arkansas Gov: “After 9/11 We Armed The Cockpits, We Could Do The Same Thing With Our Schools” [VIDEO]

Republican Arkansas Gov. Asa Hutchinson expressed his willingness for a “conversation” on raising the minimum age to purchase a semiautomatic rifle from 18 to 21 and “AR-15-style weapons” amid fresh talks on gun reform following a deadly mass shooting in Texas last week.

“You have to at least have a conversation about that,” said Hutchinson, a stalwart defender of the Second Amendment. The Arkansas governor is one of a growing number of Republicans who are expressing a willingness for some gun reform after the tragedy in Texas.

Read the full article. The real money quote is below.

“Think about after 9/11 … we put air marshals there, we put armed guards there, we armed the cockpits … We could do the same thing with our schools.” pic.twitter.com/XZo4DkfgGp