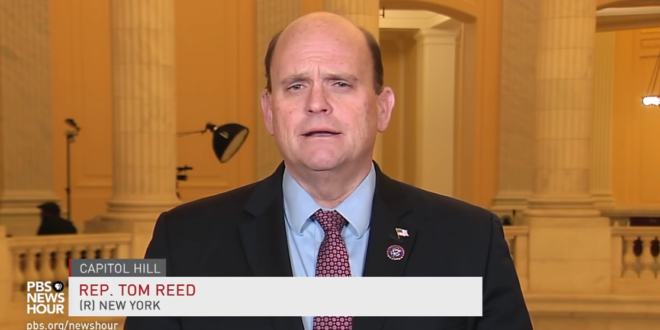 Rep. Tom Reed (R-N.Y.) announced on Tuesday that he is resigning from Congress, more than one year after a former lobbyist accused the congressman of sexual misconduct.

“After almost 12 years in Congress, today is my last day,” Reed said in remarks on the House floor. “It has been an honor to serve with you all from both parties. I love this institution as it still exemplifies what is best about our government. We are the people’s house.”

In 2019, Reed was among the eight GOP House reps who voted for the Equality Act, after which hate groups demanded his resignation. He won reelection in 2020 by 16 points. In 2021, he was among the 35 GOP House reps to who voted to establish a January 6th commission. However, he did not support impeaching Trump for inciting the riot.

New: @TomReedCongress (R-NY) announces on the House floor that he is resigning from Congress

“After almost 12 years in Congress, today is my last day”

“I humbly bid farewell and submit my resignation as a member of the House. And I wish you all Godspeed”https://t.co/2GFvbsRK45

Rep. Tom Reed (R-NY) denounces “the focus on extremism” on the House floor right before he submitted his resignation, making it his last day serving in the House.

“It is time for petty political posturing to end,” he says in a 1 minute speech. “Leadership must emerge…” pic.twitter.com/QVQqjPaTJ2

BREAKING: New York Republican Rep. Tom Reed just announced he is resigning from Congress. Reed had previously announced he would not be running for re-election after he was accused of sexual misconduct in 2021, @KyleAlexStewart is reporting.

Previous Trump Wanted To Reactivate Two Retired Generals So That They Could Be Court-Martialed For Criticizing Him
Next MTG Bought $92,000 Vehicle With Campaign Money