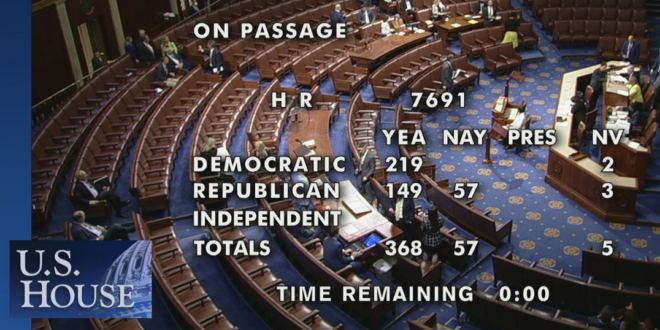 The House on Tuesday night approved $39.8 billion in aid to Ukraine, with just days to go before President Biden says his authority to fund military supplies to help fend off Russian aggression runs dry. The bill passed 368 to 57. It will now go to the Senate and then to Mr. Biden’s desk. Senate Majority Leader Chuck Schumer said ahead of the vote that the Senate will act on the aid package “as soon as possible.”

In addition to $6 billion for security assistance like training and weapons, the legislation includes $8.7 billion to replenish U.S. stocks of equipment sent to Ukraine and $3.9 billion for mission and intelligence support. The bill also provides $2 million for technical and regulatory support to Ukraine’s nuclear regulatory agency, and more than $5 billion to address food insecurity because of the conflict.

BREAKING: The House has approved an additional $39.8 billion in aid to Ukraine. It now goes to the Senate. https://t.co/uK4ehVanug

368-57: House tonight approved $40B in military and humanitarian aid to Ukraine in the wake of Russia’s invasion. All 57 members voting No were Republicans. Bill now heads to the Senate. pic.twitter.com/BMd5j4txok

Pelosi rushed the bill to the House floor without hearings or time for members to adequately review the bill.

I oppose Russia’s invasion of Ukraine, but we can’t help Ukraine by spending money we don’t have. pic.twitter.com/z2mgJkYN51

One of the 57 Republicans who voted against the Ukrainian Assistance was Madison Cawthorn. For the love of God NC11 vote this POS out of office! He should not make it through the primary! He is an embarrassment beyond the pale. pic.twitter.com/YSiv8eISbX