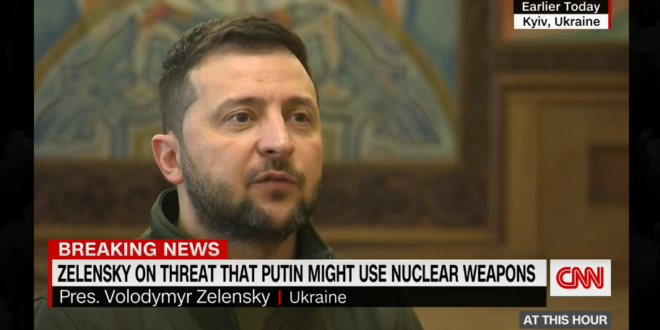 Zelensky: Be “Ready” For Russia To Use Nukes [VIDEO]

Ukrainian President Volodymyr Zelensky told CNN’s Jake Tapper in an exclusive interview from the office of the president in Kyiv on Friday that Putin could turn to either nuclear or chemical weapons because he does not value the lives of the people of Ukraine.

“Not only me — all of the world, all of the countries have to be worried because it can be not real information, but it can be truth,” Zelensky said, speaking in English.

“Chemical weapons, they should do it, they could do it, for them the life of the people, nothing. That’s why,” Zelensky said. “We should think not be afraid, not be afraid but be ready. But that is not a question for Ukraine, not only for Ukraine but for all the world, I think.”

Ukrainian President Volodymyr Zelensky told CNN Friday that “all of the countries of the world” should be prepared for the possibility that Russian President Vladimir Putin could use tactical nuclear weapons in his war on Ukraine https://t.co/sIHrT6hmvp

CNN’s Jake Tapper sits down for an exclusive interview with Ukrainian President Volodymyr Zelensky at the presidential palace in Kyiv https://t.co/r3Ql9kWryC pic.twitter.com/CHQnqvxlo4