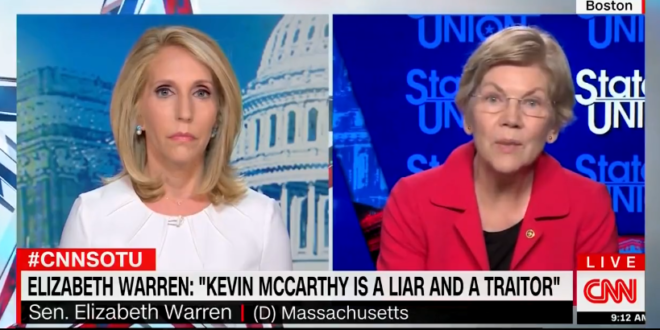 Warren: McCarthy Is “A Liar And A Traitor” [VIDEO]

Sen. Elizabeth Warren on Sunday called House Republican Leader Kevin McCarthy “a liar and a traitor” when asked about audio of the congressman saying he planned to urge President Trump to resign over the Jan. 6 riot.

“That is really the illness that pervades the Republican leadership right now,” the Massachusetts Democrat told CNN’s Dana Bash, “they say one thing to the American public and something else in private.”

“They understand that it is wrong what happened — an attempt to overthrow our government,” Warren said on CNN. “Shame on Kevin McCarthy,” she added.

Elizabeth Warren: “Kevin McCarthy is a liar and a traitor! This is outrageous. And that is really the illness that pervades the Republican leadership right now.” pic.twitter.com/zyjALsmBRN

Previous Florida State Rep Threatens To Defund Special Olympics In Feud With “Whore” County School Board Member
Next FAA: YouTuber Crashed His Own Plane For The Views