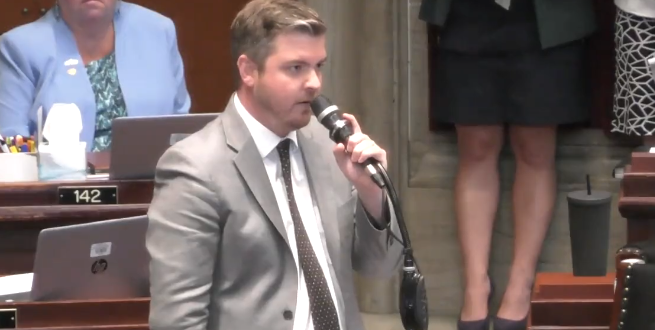 VIRAL VIDEO: Gay MO Rep Rages At GOP Author Of Anti-Trans Bill: “I Grew Up Afraid Of People Like You”

Local school districts in Missouri would be able to call elections on whether to ban transgender athletes from youth sports under a bill given initial approval by the House on Wednesday evening. A bill originally designed to audit the state’s voter rolls and tweak elections laws was amended by Rep. Chuck Basye, a Rocheport Republican, to include the language.

The chamber approved the amendment by an 89-40 vote after almost three hours of fierce and emotional debate. Democrats called the measure discriminatory and designed to invoke fear. “I was afraid of people like you growing up and I grew up in Hickory County, Missouri,” Rep. Ian Mackey, a St. Louis Democrat who is openly gay, said to Basye. “I grew up in a school district that would vote tomorrow to put this in place.”

“Your brother wanted to tell you he was gay, didn’t he?” Mackey asked him. Basye said he did and his brother thought their family would hold it against him. “Why would he think that?” Mackey asked.

“I don’t know,” replied Basye. The GOP representative said, “that was never going to happen.”

The exchange has gone wildly viral on TikTok.

Watch and enjoy the smoke.

Meanwhile, in Missouri, State Representative @IanMack03007724 gives one of the most powerful speeches I have ever heard.

Turn on the volume. You want this timeline cleanse.pic.twitter.com/IPaxHtEJyH