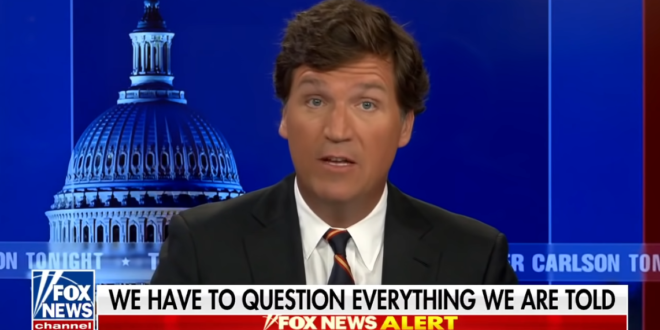 Fox News host Tucker Carlson is scheduled to speak at an event in Iowa this summer that has historically been used by Republicans with presidential ambitions as an opportunity to raise their public profile and win over social conservatives.

Carlson will speak at the July 2022 FAMiLY Leadership Summit, an annual event that has been attended by top conservatives such as former Secretary of State Mike Pompeo, himself a possible presidential candidate in 2024, and Iowa Gov. Kim Reynolds.

During a number of interviews in recent months, Carlson, the top rated cable news host in the country, has dismissed rumors that he has considered a run for president.

The Family Leader is an anti-LGBTQ hate group that appeared on JMG many times during the battle for same-sex marriage.

In 2009 when Iowa became the third state to legalize same-sex marriage, Family Leader led the successful campaign to remove the three state Supreme Court justices who voted for it.

In 2011, Family Leader president Bob Vander Plaats was accused of selling his presidential endorsement to Rick Santorum in return for a $1 million donation. The deal was reportedly organized by Brian Brown’s National Organization For Marriage. The FEC cleared Vander Plaats in 2015.

During the 2012 presidential race they demanded that all candidates sign an anti-marriage pledge. First to sign was Michele Bachmann.

Tucker Carlson is appearing at the Family Leader summit in Iowa, a typically influential political forum in Iowa GOP politics ahead of presidential cycles

Tucker Carlson heading to Iowa, home of the presidential caucuses, this summer. This particular group’s gathering has long been an event attended by Republicans with presidential ambitions. https://t.co/Ak6H9NTeri