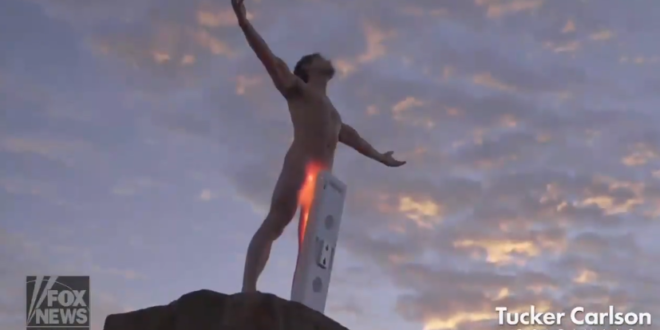 Tucker Carlson and good pal Kid Rock had another friendly conversation on Fox News on Friday, with one topic of discussion being “testicle tanning.”

The subject had been raised earlier in Carlson’s show by Andrew McGovern, an Ohio-based fitness professional who was brought on to help answer Carlson’s question, “How do you reverse the effects of falling testosterone?” One of the solutions McGovern offered was red light therapy, which, when Carlson asked, he said includes “testicle tanning.”

Rock had apparently been listening along, because when Carlson addressed him later, the first thing the musician said was, “Dude, stop! Testicle tanning? Come on.”

The homoeroticism of the clip is off the charts.

Tucker Carlson has done a whole documentary encouraging his audience of men to tan their testicles with red light in order to reverse the damage of reduced testosterone caused by stupid libs and not eating enough meat.

I promise you are not prepared for Tucker’s latest montage pic.twitter.com/8tdvYTW2cn

Tucker is promoting his new documentary called, ‘The End of Men.’ He says, “One of the biggest stories of our lifetimes is the total collapse of testosterone levels in American men.” (This may be more autobiographical) pic.twitter.com/QFIpcNhaIU