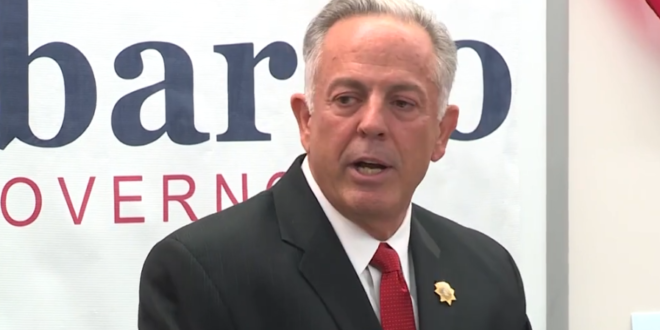 Former President Donald Trump is endorsing Clark County Sheriff Joe Lombardo for governor, giving the candidate a significant leg up over Nevada’s crowded pool of Republican gubernatorial candidates with less than two months to go until the June 14 primary election.

In his endorsement message late Wednesday, Trump wrote that Lombardo, who was already considered the frontrunner in the 15-person Republican primary, has “fought some of the worst criminals and defended neighborhoods and communities from the horrific violence enabled by the Radical Left across our great country.”

The development is a blow for other gubernatorial candidates who have tried to ingratiate themselves to Trump, including former Sen. Dean Heller, who said he would love to have the former president’s endorsement and has called Joe Biden an illegitimate president.

Around 75% of Nevadans live in Clark County, which includes the cities of Las Vegas and Mesquite.

Trump endorses Sheriff Joe Lombardo in the Nevada governor‘s race, something Dean Heller and Michelle Fiore were also seeking (Fiore even bought ads to air in West Palm Beach so they’d be seen at Mar-A-Lago, as ⁦@metzsam⁩ reported) pic.twitter.com/bXC5RWRK7C

🚨🚨🚨 Red alert! Michelle Fiore our own Trump loving gun toting succubus has changed what she’s running for. Was gonna run for governor which was unwinnable now running for treasurer!! 👀👀👀 pic.twitter.com/i3smWUGQjc

Hearing Trump is likely to endorse Clark County Sheriff Joe Lombardo for the Nevada Governor race, which lines up with Michelle Fiore dropping down to the Treasurer race after conversations with TrumpWorld.