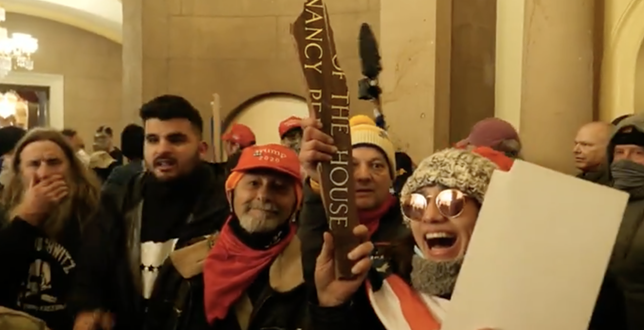 Emily Hernandez, 22, became one of the most well-known faces of the Capitol attack after pictures and videos of her went viral, including one in which she is seen standing just a few feet from Robert Keith Packer—memorably wearing a “Camp Auschwitz” sweatshirt—and grinning widely while appearing to hold the purloined piece of Pelosi’s nameplate. Also pictured with Hernandez are her uncle, William Merry, 63, , and his friend Paul Westover, 53.

On Monday, U.S. District Judge James Boasberg sentenced all three defendants to jail: Hernandez to 30 days, and Merry and Westover each to 45 days for their role in the mob that overwhelmed police and swarmed the Capitol, temporarily blocking Congress from certifying the result of Joe Biden’s win in the 2020 presidential election. Prosecutors had requested 45 days behind bars for Hernandez, 120 days for Merry, and 90 days for Westover.

Missouri Trio Who Stole Part of Nancy Pelosi’s Nameplate Sentenced to Time Behind Bars for Breaching Capitol on Jan. 6https://t.co/mqZFnKvC9J