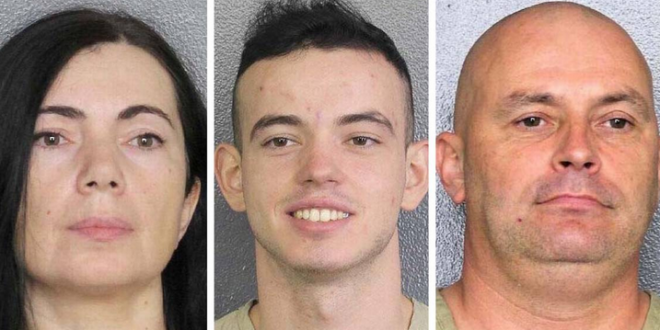 Three family members have been charged with a hate crime after kidnapping and beating a gay man so severely that he was permanently blinded, Broward County prosecutors said Tuesday. Two parents and their son [photos above] were formally charged Tuesday on counts of first-degree attempted murder, burglary with battery and kidnapping “with prejudice” — all charges enhanced under Florida’s hate crime law. That means they all face up to life in prison on each count.

From the Broward County Sheriff’s Office:

The victim, 31, of Pompano Beach, was severely beaten during an incident that occurred in the city on or about August 6, 2021. He has been permanently blinded and sustained other serious injuries as a result of the incident. He has invoked Marsy’s Law rights.

They are charged with attempted first-degree murder, battery during the burglary of a dwelling, and kidnapping. The three charges were filed against all three defendants as hate crimes. The maximum possible penalty for each of the three charges is life in state prison.

A fourth person, Vladyslav Makarenko (DOB 11/4/1996), was transferred from Alabama to the Broward County jail system on Monday. Prosecutors are reviewing the case against him and formal charges have not been filed at this time.

The victim is declining to be named publicly and details about the attack have not yet been released. The fourth suspect named above is also the son of the accused parents.