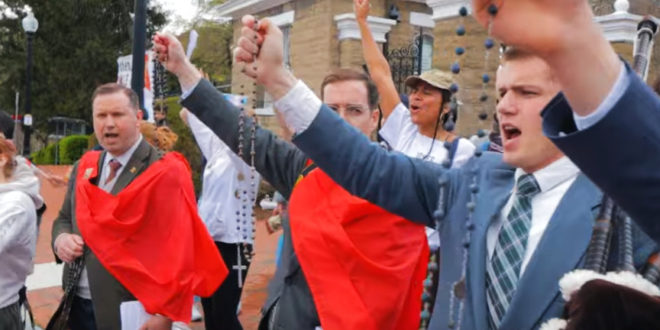 From the red-caped Catholic loons:

Although Georgetown University is the oldest Catholic university in America, many of its students and faculty members are at odds with Church teaching.

When TFP Student Action volunteers visited the Jesuit campus on April 4, 2022, to defend family values, they met a mob of unruly students who attempted to kick them off the public sidewalk and deprive the young Catholic group of their right to free speech.

To disrupt TFP’s peaceful demonstration, pro-transgender students uttered a constant string of vulgar insults and slogans sprinkled with the f-word. One man, who was politely offered a pro-family flyer, spat at the author of this article. Curses filled the air, making coherent debates more and more difficult.

They blared perverted music over a loudspeaker and shouted insults on a hand-held bullhorn. The scene was Hellish: Frantic dancing, lewd behavior, same-sex kissing, and twerking. By their obscene behavior, the pro-sin crowd revealed which master they serve.

The Society for the Defense of Tradition, Family and Property (TFP) was founded in Brazil in 1960.

Its US branch primarily exists to perform stunts such as the one seen in today’s video.

They also operate a “Call To Chivalry” summer camp, where young boys cosplay as Crusades-era warriors while wearing chainmail armor.

TFP advocates for a Catholic theocracy in the United States based on “feudal biblical values.”