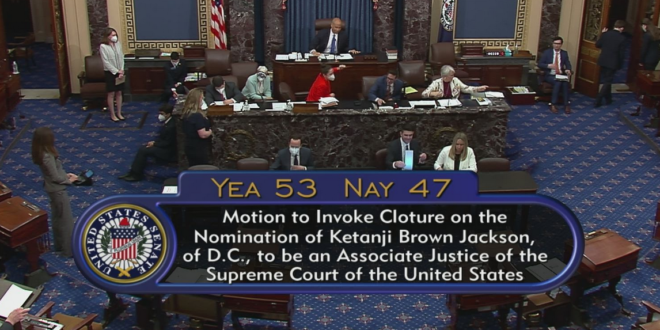 The Senate cleared the way Thursday for a final vote to confirm Ketanji Brown Jackson to the Supreme Court, preparing to endorse the Black woman on the high court and giving President Joe Biden a bipartisan endorsement for his historic pick.

The White House said Vice President Kamala Harris would be present to preside, though her tie-breaking vote won’t be necessary. Three Republican senators have said they will support Jackson, who would replace Justice Stephen Breyer when he retires this summer.

We’ll have a live-stream of the final vote shortly.

53-47, Senate clears final procedural hurdle facing Ketanji Brown Jackson’s ascension to the Supreme Court. After shutting down debate with the support of 50 Democrats and three Republicans, she will be confirmed late in the 1pET hour.