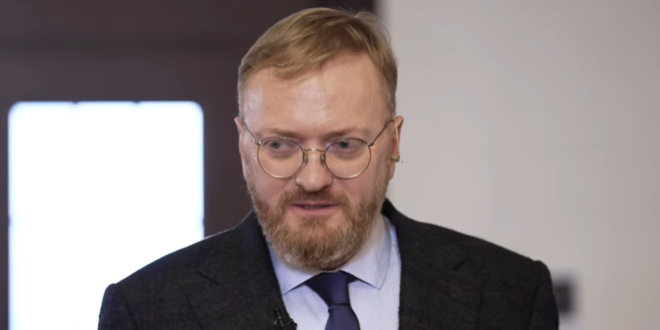 Homophobic Russian MP Vitaly Milonov is presenting a reality show where contestants have to guess which person is gay in order to win a cash prize.

I’m Not Gay is a series that sees eight men move into a country house together. At the end of each episode, they vote to eliminate a contestant they suspect of being gay. If they correctly guess, then they share two million rubles (£21,000), but if the homosexual man dodges detection he wins the prize.

In the first episode, which has been shared on YouTube, Milonov tells the contestants: “I hope that you will quickly figure out the gay.”

Milonov has appeared on JMG many times, most recently in 2018 when he forced the closure of an LGBT film festival by falsely claiming there was a “hostage crisis” at the venue.

In 2017, he declared that then-German Chancellor Angela Merkel had “kissed Satan” by supporting a vote on legalizing same-sex marriage.

Also in 2017, he attempted to ban Disney’s live-action version of Beauty And The Beast as “gay propaganda.”

Later that year he vowed to unleash “whips and torches” on a lesbian couple who mocked him by kissing on his flight.

In 2016, he appeared here when he vowed to arrest athletes and fans at an LGBT sports festival.

In 2015, he proposed a ban on shirtless men and “unethical attire” in public places except for beaches.

In 2014, he attempt to ban Eurovision from being shown in Russia due to that year’s win by “pervert” Conchita Wurst.

In 2013, he declared that gay men “deserve to be punched and kicked” after a gay man was blinded in a hate crime assault. That came days after he led a police raid on a gay Halloween party.

The first episode of the show has over 1M views.